Mackenzie has loved animals since she was a young child.  Teachers at her school, FSDB, would comment about her love for animals in science labs, art and stories. Often, people in public would note how well she approached animals. 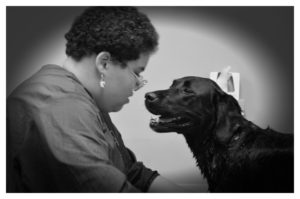 Mackenzie volunteered for two summers at The Alligator Farm working with reptiles and enjoyed every minute of her time there. She also volunteered at Cindy’s Dog Retreat for several summers and it became apparent that this might become a future occupation. Perhaps, Mackenzie has a special language; she is deaf yet communicates with dogs of every breed. The author Adrian Fogelin from Tallahassee exchanged communication on reading her books with Mackenzie during her high school years and has spent time with Mackenzie here in St. Augustine. Adrian has observed her with dogs, and was moved by her interactions with them, particularly cuddling with a dog whose owner said had never let anyone pet before, that she wrote Mackenzie into the dedication of her latest book – “Special thanks to my friend, Mackenzie Moore-Adams.  You’re an inspiration!”

Mackenzie received her schooling and license in Jacksonville and had planned to work for a local dog groomer. However, she soon learned that most places do not hire full time and she wanted to work as much as possible. Her step-dad built a beautiful shop in the garage and Vocational Rehab pitched in and helped with the finishing touches with her shop front including air conditioners, strobe doorbells and digital hearing aids to accommodate the use of both clippers and other noises. Mackenzie is involved with the K9s for Warriors program in Ponte Vedra.  She gives back to this organization by grooming any of their foster puppies free of charge.

Mackenzie went before the city of St. Augustine zoning board and told them it had been her dream to work with animals and received permission for zoning for her shop in her neighborhood.  Mackenzie gets to know each dog before grooming by spending time with them playing and establishing trust and rapport. It is not an in and out dog grooming factory – it is a home away from home and Mackenzie’s customers love the experience!